We’ve been enthusiastically writing about Cleveland Ballet for a couple of years now. They’ve assembled a talented and attractive group of dancers and presented them in more and more ambitious programs. But in their latest production, Alice, which opens this weekend for two performances only, we feel that choreographer Margo Sappington has brought the company along to another level.

In Alice, the company has taken a giant step forward in the realm of characterization. In their facial expressions and in their emotions, the dancers embrace the eccentric characters from Alice’s Adventures in Wonderland and Through the Looking Glass and portray them with verve and commitment.

As Sappington explained at a recent studio showing, Alice is presented “like a ` circus.” There’s a big, red circle in the middle of the stage and when the dancers are outside that circle, they’re out of character: playing cards, sitting around, slipping in and out of costume. When they step into the circle, though, they’re in character and Alice’s adventures proceed like the numbers in a circus or a music hall revue. When Alice (Jenna Steiner) meets the White Rabbit (Rainer Diaz) we see Steiner ably playing the ‘straight man’ and Diaz depicting a nervous bunny who tosses off one bravura feat after another. 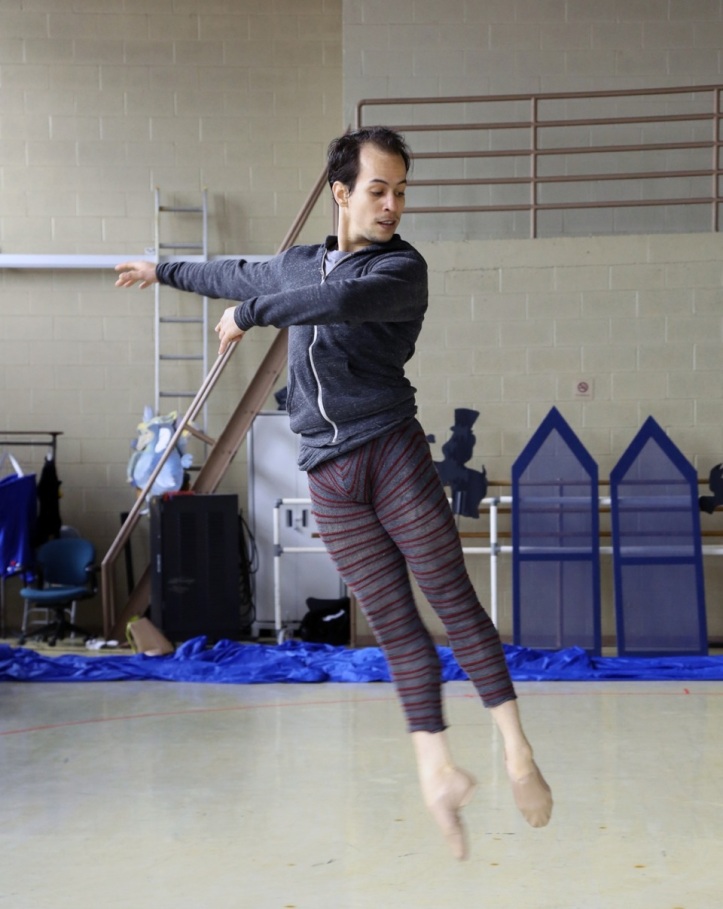 Alice’s visit to the flower garden is staged like something from Ziegfeld Follies with the women depicting flowers and Alan Obuzor and Andy Sousa as bumble bees who are very much into their work, which involves a good deal of flirting. The classical dancing here is especially accomplished but again it’s the characterizations that set this number apart.

We chuckled non-stop through Act I, not least because of the eclectic, effervescent music. “Do you like my music?” asked Sappington between acts. “It’s light classical music from the BBC.” The musical collage is credited to Paul Schwartz.

There’s more in Act II. We watched Jason Wang as the caterpillar, lounging at voluptuous ease, then performing an Indian classical dance to sitar music. We also watched the mad tea party, a work in progress with Victor Jarvis as the Mad Hatter, Rebecca Ramirez as the March Hare, and Lüna Sayag, very funny as the Dormouse who just can’t stay awake. We had to leave before the run through was complete but we’re told Act II also includes 18 playing cards (an opportunity for members of the Youth Company to perform), the iconic croquet game with dancers portraying the flamingoes / croquet mallets and the hedgehogs / croquet balls. Lauren Stenroos is the Queen Hearts. Off with their heads!

So that’s the good news about Cleveland Ballet’s Alice. The bad news is that both shows are nearly sold out. No additional performances are planned. Good luck getting tickets.

This site uses Akismet to reduce spam. Learn how your comment data is processed.

ClevelandConcertDance.com is about whatever is coming next in Northeast Ohio. And if it's happened already, we want to talk about it. Ballet. Modern Dance. Theater. Galleries. Museums. Finished works of art. Artistic process. Artists themselves, students and absolute beginners. Read what interests you and, if you're so moved, comment or contact us.
Loading Comments...
%d bloggers like this: